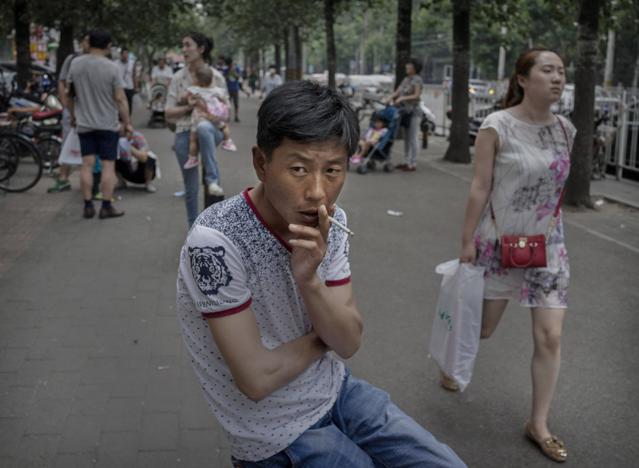 BEIJING, CHINA – JUNE 01: Researchers estimate that smoking will cause about 20% of all adult male deaths in China during the 2010s.  (Photo by Kevin Frayer/Getty Images)

When it comes to smoking and vaping, the world of public health seems more like Oceania, 1984, every day. In that Orwellian realm, Big Brother issued nonsense statements such as “war is peace, slavery is freedom, ignorance is strength.”

In the U.S., the CDC and the California Department of Health have assumed the role of Big Brother, effectively telling smokers they might as well keep puffing because e-cigarettes are hardly any safer. Talk about an Orwellian inversion statement!

In truth, vaping is far less risky than smoking. E-cigarettes and other devices heat a nicotine solution to produce an inhalable vapor. They release none of the carcinogenic tar of cigarette smoke, making them the ideal nicotine-delivery system for smokers seeking to reduce or halt their intake of combusted tobacco products.

On a global scale, the World Health Organization is Big Brother. Dr. Margaret Chan, the WHO’s director-general, is a confirmed skeptic. As she told China Daily last week– “I recommend that national governments ban, or at least regulate, them,” she said. (Elsewhere, Dr. Chan has opined that e-cigarettes should be regulated the same way cigarettes are regulated– even though they are not remotely equivalent in terms of harm.)

Dr. Chan’s comments were contained in a news story on Beijing’s crackdown on indoor smoking which began on June 1st. The ban has reportedly boosted the public profile of e-cigarettes. As a result, the article said, vaping is becoming increasingly popular, particularly with young urbanites, according to Gan Quan, China director of the International Union against Tuberculosis and Lung Disease.

These facts show how nonsensical it is to consider a ban on e-cigarettes while failing to call for one on cigarettes. After all, cigarettes are 20-100 times more dangerous than vaping.

In fact, if China truly wants to be smoke-free, it is not clear why the government, which is not known to be shy about imposing paternalistic policies in other areas, does not simply ban cigarette production and let e-cigarette use bloom.

After all, e-cigarettes are a homegrown product, invented in China in 2003. Shenzhen province housed 900 manufacturers of the devices in 2013, up 200% from the previous year, and accounted for over 95% of global e-cigarette production. Yet, despite considerable progress in e-cigarette industry, China’s traditional cigarettes still dominate the Chinese market.

As Yanzhong Huang of the Council on Foreign Relations recently pointed out, “If only 1% of China’s smoking population turned to e-cigarettes, it would mean a market of about 3.5 million e-cigarette users.” The state-owned China National Tobacco Corporation, which sells almost all of the cigarettes consumed in the country, could become the world’s largest e-cigarette maker.

Right now, however, the Corporation is a massive income source for the nation. It generates CN¥816 billion (7-10% of GDP) in revenue. Indeed, tobacco receipts finance as much as half of some provincial governments’ budgets. The loss of so much income would make prohibition a huge challenge.

Another barrier is low public awareness. Only 25 percent of Chinese adults have a comprehensive understanding of the health risks of smoking, and less than a third are aware of the dangers of second-hand smoking, according to World Health Organization. Less than 10 percent of Chinese smokers quit by choice and Chinese people are beginning to smoke at younger ages.

As for those Chinese smokers who do turn to vaping, China’s e-cigarette industry is currently very poorly regulated and the quality of vaping products is uneven. If e-cigarettes are to replace traditional cigarettes and offset lost tobacco revenues, the government must regulate the industry more carefully to ensure safety and quality.

In the end, China is unlikely to ban cigarettes. At the very least, then, the environment should be made as friendly as possible for moving smokers to quality-made e-cigarettes.

Is there any hope for WHO on this issue? Dr. Chan has already received important information about the promise of electronic cigarettes. In spring 2014, 53 international health experts wrote a joint letter encouraging her to “resist the urge” to “control and suppress” electronic cigarettes by classifying them as equivalent to cigarettes for purposes of regulation. The letter was issued in the run up to the sixth Conference of the Parties, COP6, under the Framework Convention on Tobacco Control. The signatories advocated for tobacco harm reduction, or safer nicotine use in the form of vaping, to be considered by the parties.

In the fall of 2014, COP6 culminated in a decision to “prepare an expert report, with independent scientists and concerned regulators, for the seventh session of the Conference of the Parties. The report will include an update on the evidence of the health impacts of [electronic nicotine delivery systems], [their] potential role in quitting tobacco usage, [and their] impact on tobacco control efforts.”

This sounds promising – if the scientists involved are truly independent of a pre-existing animus against harm reduction. Geneva insiders, such as Dr. Delon Human of Switzerland-based Health Diplomats, anticipate that such an analysis won’t be available until the next COP meeting, probably slated for fall 2016.

One wants to be optimistic about COP7, but just in case, I hope many of the experts who penned the earlier letter to Dr. Chan, will write her again with a detailed, data-rich assessment of the virtues of tobacco harm reduction. If WHO is a responsible, evidence-driven agency, it will quit the doublespeak on e-cigarettes.

A Guide to E-Cigarette Etiquette (Or, How to Vape in Public Without Being a Jerk)

One thought on “Keep Vaping China, Don’t Listen To The World Health Organization On E-Cigarettes”