Arctic Sub Ohm Atomizer, by Horizon Tech is made of stainless steel and glass, and comes with coil heads at 0.2ohms and 0.5ohms. The 2 vertical coils have an organic cotton wick that allows for a clean and great vape! $49.99 at www.greenelectroniccigarettes.com!

E-Cig Use Has Sharply Increased Among Young People

Teens have moved away from traditional cigarettes to vaping in droves.

While traditional smoking is going out of style among U.S. high school students, e-cigarettes use is rapidly rising.

According to federal data released last week, use of the electronic devices among middle and high school students tripled from 2013 to 2014, while use of regular tobacco decreased. At 13% of this population, more teens are now using e-cigs than traditional cigarettes.

According to the report, about a quarter of all high school students and 8% of middle schoolers used tobacco in some form last year, contributing to an overall rise in young people using any form of tobacco product in 2014. This is the first increase in years.

But the report also found that tobacco smoking among high schoolers had declined significantly, from 16% in 2011 to 9% in 2014, suggesting that some teen smokers may be using e-cigs to quit.

Policymakers remain uncertain how to regulate e-cigarettes. Scientists do agree that the devices, which deliver nicotine without the added tar and other harmful chemicals, are likely less dangerous than tobacco cigarettes, which kill an estimated 480,000 Americans a year.

But experts are concerned about the growing popularity of e-cigs among teens, since their potential long-term health effects are still unknown. In interviews, teens said that in the last year or so “vaping,” the term for smoking an e-cig, had become almost as common at school as laptops. A 15-year-old sophomore at a school in Westchester, N.Y., estimated that 70% of his friends now vape, calling it “the healthy alternative taking over my school.”

Many students said they were using the devices to quit smoking cigarettes or marijuana, while others said they just enjoy the taste. E-cigs are increasingly marketed to teens, with flavors like “Unicorn Puke” and “Hawk Sauce,” and some brands are endorsed by popular rappers and other celebrities.

Selling e-cigs to minors is illegal in most states and the Food and Drug Administration proposed last year to make it a national ban. But many vape shops have relaxed policies, and teens can easily purchase the devices online simply by clicking “yes” to verify they are over 18.

Last year, the Centers for Disease Control and Prevention noted a rise in e-cig use by young people, prompting anti-tobacco advocates to warn that the devices would “normalize” smoking and contribute to a resurgence in tobacco use by getting young people hooked on nicotine.

“This is a really bad thing,” said CDC director Dr. Thomas R. Frieden. “This is another generation being hooked by the tobacco industry. It makes me angry.”

But the more recent numbers show that tobacco smoking among teenagers is declining faster than it has in years, dropping by 25% between 2013 and 2014. The pattern seems to suggest that the devices may not be a “gateway” to cigarettes, as anti-tobacco advocates predicted, and may instead be helping reduce youth smoking.

“They’re not a gateway in, and they might be accelerating the gateway out,” said David B. Abrams, director of the Schroeder Institute for Tobacco Research and Policy Studies.

Many teenagers agree, describing vaping as “an entirely different culture” from cigarette smoking. “E-cigarettes appeal less towards the stereotypical longhaired stoners, and more towards sweatshirt-blue-jeans Silicon Valley programmer,” said Kenny, a high school senior from Florida. “You can compare them to Apple computers.”

The state Senate yesterday unanimously approved HB1186, which was one of two bills emerging from the House aimed at putting some restrictions on sales of vaping products (the other, HB1078, failed).

There are a lot of things to dislike about HB1186. While it bans sales to minors, which isn’t all that controversial, it puts in place a requirement for childproof packaging for the products. That seems unnecessary. But the big victory in passing the legislation is that we’ve avoided lumping vaping products in with traditional tobacco products for the purposes of regulation.

END_OF_DOCUMENT_TOKEN_TO_BE_REPLACED

The war over vaping’s health risks is getting dirty

The war over vaping’s health risks is getting dirty

Danielle Venton 16 hrs ago
For nicotine enthusiasts, 2015 will be remembered as part of a golden era. Less than 10 years after they were introduced in the United States, e-cigarettes have gone relatively unregulated by health agencies, with companies and users making their own rules in a nicotine-laced Wild West. E-cigarette companies have been advertising their products to adults and children alike, claiming to help smokers quit while simultaneously promoting lollipop-flavored liquids. But now health organizations, including the Centers for Disease Control and Prevention and even city-based public health departments are starting to fight back—not in the form of regulations, but with their own media campaigns.

END_OF_DOCUMENT_TOKEN_TO_BE_REPLACED 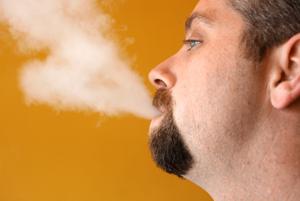 Tom Smithback smoked for 40 years, burning through two packs a day. Every 10 days, he spent $144 to sustain the addiction, and people who saw him would never have guessed he was only 64.

“The smoking was killing me, slowly but surely,” Smithback said.

But he didn’t fully realize what damage it had done until June, when he discovered electronic cigarettes and started “vaping” instead of smoking. Within a month, he had quit tobacco cigarettes entirely. His blood pressure dropped from 145/80 to 122/62 and his sinuses cleared up. He feels better in the morning and he looks years younger, according to those who know him.

“You go downhill so slowly you don’t realize it,” he said. “I can’t believe the difference in someone’s health.”

Smithback still vapes daily (twisted peppermint is his preferred flavor) and is now looking forward to life beyond is 70th birthday.

Stories like Smithback’s are common among Wisconsin’s vaping community as regular smokers switch to vaping and urge others to do the same. But while researchers and health officials acknowledge the potential for reduced harm by switching, they are often far more concerned about the still-unknown dangers e-cigarettes and vaping could trigger.

“The problem is that we don’t have enough evidence right now to make a strong perception,” said Megan Piper, a researcher with University of Wisconsin-Madison’s Center for Tobacco Research and Intervention.

The past few years have brought hundreds of studies, commentaries and news articles about electronic cigarettes, yet they are still described by opposing sides as either an incredibly effective method to end smoking or the next major public health hazard.