“Smokers who use nicotine products as a means of cutting down on smoking are more likely to make quit attempts,” the RCP says. “Promoting wider use of consumer nicotine products, such as e-cigarettes, could therefore substantially increase the number of smokers who quit.”

In England, the RCP notes, e-cigarettes have surpassed nicotine replacement therapy (NRT, i.e., gum, patches, nasal spray, etc.) as an alternative to smoking. While the evidence so far is limited, it suggests that e-cigarettes are at least as effective as NRT in helping smokers quit, and there is reason to believe they will work better for many people, since vaping more closely resembles the activity it is supposed to replace.

The National Health Service’s Stop Smoking Services (SSSs) recently started to help smokers trying to quit with e-cigarettes, and the early data are promising. “The average quit rate in all smokers using SSSs was around 51%, and among e-cigarette users it was 66%,” the RCP reports. “Although factors other than the product itself are likely to be involved in this difference, the finding is certainly consistent with high efficacy as a cessation therapy.”

Data from England indicate that “smokers who use e-cigarettes at least daily are indeed twice as likely to make a quit attempt, or else to reduce their smoking, [as] those who do not.” Although that study did not find that e-cigarette use made success more likely, “independent clinical trials and observational data from the Smoking Toolkit Study [a British survey] indicate that e-cigarette use is associated with an increased chance of quitting successfully.” 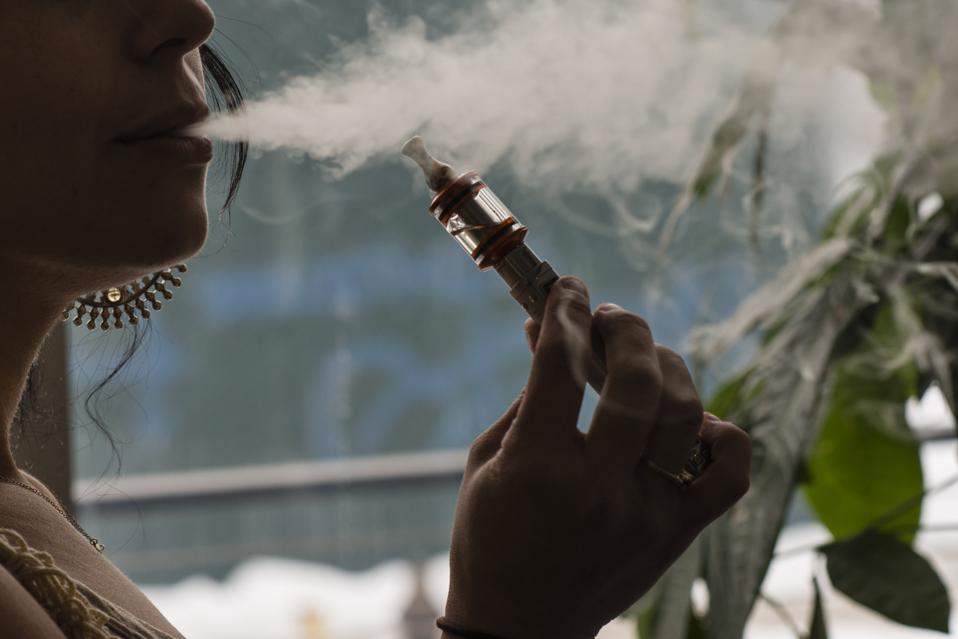 Are e-cigarettes a gateway to smoking?

Critics of e-cigarettes worry that they will “renormalize” smoking and increase its incidence by fostering nicotine addiction among people who otherwise never would have used tobacco. But there is very little evidence that is happening. To the contrary, smoking rates and vaping rates are moving in opposite directions, and regular use of e-cigarettes does not seem to have much appeal among people who have never smoked.

“There is no evidence that either NRT or e-cigarette use has resulted in renormalisation of smoking,” the RCP says. “None of these products has to date attracted significant use among adult never-smokers, or demonstrated evidence of significant gateway progression into smoking among young people.”

If there were a significant gateway effect, surveys should identify people who have never used tobacco but who regularly use e-cigarettes (often enough to get hooked on nicotine) and eventually move on to smoking. But if such people exist, there are not many of them.

“E-cigarette use in Britain is, to date, almost entirely restricted to current, past or experimental smokers,” the RCP notes. “As with NRT, there is no evidence thus far that e-cigarette use has resulted, to any appreciable extent, in the initiation of smoking in either adults or children; the extremely low prevalence of use of e-cigarettes among never-smoking adults and children indicates that, even if such gateway progression does occur, it is likely to be inconsequential in population terms.”

By contrast, the impact of turning large numbers of smokers into vapers could be dramatic. “The growing use of electronic cigarettes as a substitute for tobacco smoking has been a topic of great controversy, with much speculation over their potential risks and benefits,” says John Britton, chairman of the RCP’s Tobacco Advisory Group. “This report lays to rest almost all of the concerns over these products, and concludes that, with sensible regulation, electronic cigarettes have the potential to make a major contribution towards preventing the premature death, disease and social inequalities in health that smoking currently causes in the UK. Smokers should be reassured that these products can help them quit all tobacco use forever.”

Vape At Work Bosses Should Let Staff VAPE in Office